When the Apocolypse comes, what will you be doing? Out on a picnic enjoying life or cowering in your beef-jerky-lined basement?  Doomsday Preppers are an…interesting lot.  I reckon maybe they have a few kangaroos loose in the top paddock?  But when the $H!T hits the fan I hope to be in a somewhat balanced state – having enjoyed life, but being prepared.  I occasionally watch the TV show Doomsday Preppers, based in the good ol’ USA where crazy is as crazy does. Doomsday Preppers (Nat Geo). 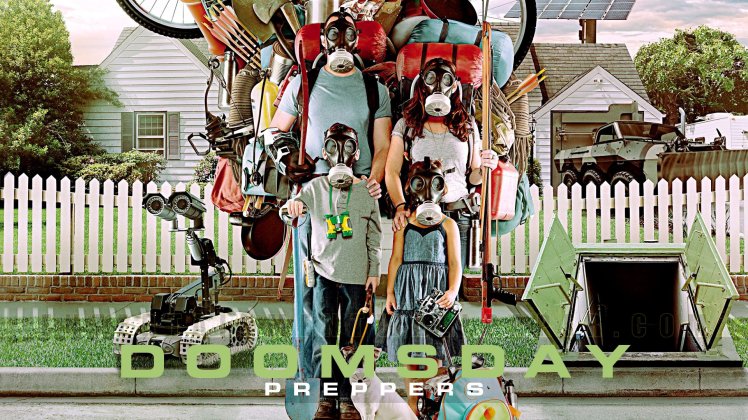 There I saw manic military types pumping iron in their fallout shelters, while their dutiful wives canned peaches and made salt beef.They taught their kids to fire weapons. I actually watched people sell their houses and move their families onto isolated patches of land featuring underground bunkers, shipping containers, tunnels and fortifications.  Whooaaaa.  That’s some kind of crazy.  And a massive gamble on your families’ lives, wellbeing and NORMALITY.
“Hey Doris, I have this fantasic idea!  Lets ask the kids to swap hopscotch and school for AK47s and bunker digging.”

I’m just sayin’, when Supreme Grand PooPah Kim-Jong Un shoots his ballistic missiles at someone because they won’t say he invented Gangnam Style dancing, I’m betting there won’t be a enough time for a conversation around the dinner table about which backpack to take.
Or when sparks fly (or nuclear bombs) as Vlad gets his knickers in a knot because he’s been Trump Dumped by a Don Twitter stating that Nawaz Sharif of Pakistan is the new BFF. Like, I’m pretty sure we’re not going to get Facebook alerts telling us to all make our way to our nuclear fallout shelters. 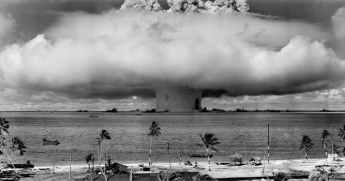 “Hi Jan, how’s your day?”
“Oh good, just on the way to the bomb shelter. You?”
“Yeah, just picking up some potassium iodide from the pharmacy first, I like your roses by the way…”

Now I’m not saying that someone that lives in an isolated place, away from the hustle of city life is abnormal.  Not at all.  A tree change would do us all good. But I am saying that Little Johnny is going to turn out a wee bit different to his peers if he has to spend his first

two decades in a shipping container with only Wild Bill Hickok and Jed Clampett for neighbours. (not to mention that the chances of him coming out of it with all his fingers, toes and eyes are fairly slim.)

Alright, alright, I might be sounding a little sarcastic and scornful.  But when the Big One comes, I don’t plan to hang around suffering from radiation sickness, burns, or starvation. That’s what vodka and diazepam are for.   Just so you know? MY preppers cupboard has vodka and diazepam in it.

Here’s the thing.  Way back when it was only Def Con 41 or thereabouts, I felt safe as houses.  I gardened, watched Mr. Ed, did macrame.  Then on my way to a backpacking holiday in Europe (I flew from Australia) my aircraft had to fly AROUND the Gulf where some idiot had begun a war.  Dang that was inconsiderate.  Not only did it add 3 hours of flying time with the very questionable Sabena Airways, it shattered my view of world peace.

Then one morning a decade later I woke up to feed my baby son.  A banner across the TV said “US at War.”  Well, that might have been a bit premature, but it came in response to the twin towers falling.  Not long after that I began to make sneaky lists.  Since then the Defence readiness Condition seems to have risen in concert with the price of petrol.  Now, with the Ranga who Shall Not Be Named’s finger on the button,  I’m glad I have a cupboard.

I know I said it wouldn’t help if we’re caught up in a Chinese Apocolypse or a Nuclear Molotov.  But it makes me feel better.   I reasoned it out.

Here, in Sydney, Australia, we’re not in the firing line…much.  Probability-wise, that’s not what is going to happen.  So I made a list of Unfortunate Events that may strike the prettiest harbour in the world.  Meteors are not included…. I suppose they should be, but I’m talking things that are more likely.  As we’re an island nation, we’re pretty much on our own in a pinch.

(Above – the Northern beaches of Sydney has been pulverised by a few massive storms in the last two years.)

So I figure, if the trucks can’t get through, if there was a city-wide devastating storm, if there’s have no petrol, if fire has burned supplies, if the water is contaminated or we can’t get out because of fear of disease, or some group has put a  missile into the Old Coathanger …..My family and I are right for 6 months.  Hopefully I can grow a tomato and catch some magpies to domesticate in the meantime.

For information on what to store for a ‘placid prepper’s’ cupboard, keep watching Onyajay. Coming soon.  No…really.  I have it totally sorted.

Do you love a bit of sarcasm? humour?  hate idiots?  Join me at Onyajay, hit the follow button.

If you would seriously like to learn a bit about Prepping, try  The Prepper Dome.

The Creative Zone for Making Art

The Adventures Of a Thirty-Something Life

Walk In Their Steps

Adventures of my ancestors

Discovering Your Ancestors - One Gene at a Time

A critique of culture

Stories from the far side of normal

But who are we kidding? Normal's overrated anyway.

The Daily Rejection (A Writer's Woe)

Humor at the Speed of Life

With a Side of Sarcasm

Your regular dose of honesty....

The Bold and the Bitchy
Drinking Tips for Teens

Creative humour, satire and other bad ideas by Ross Murray, an author living in the Eastern Townships of Quebec, Canada. Is it truth or fiction? Only his hairdresser knows for sure.